What do we mean when we talk about compromise?  I get the feeling it can be rather a negative idea.

The OED definition is:

To settle a dispute by mutual concession; or to bring under suspicion or into danger by indiscreet action,

Perhaps the negative connotations of the second definition colour the meaning of the first?

It seems to be about not getting enough of what we want, in order to satisfy someone else, or what we are prepared to give up, probably grudgingly, to get close to what we originally thought we wanted.

Doesn’t this assume that the person we are compromising with (or is that for?) is in competition for a finite resource, or that they want the exact opposite from us, and it is impossible for us to have both?

This is something I think of as the Cordelia Complex, after the rigid thinking youngest daughter of King Lear in Shakespeare’s play, who asks,

Why have my sisters husbands if they say they love you all?

Haply I shall wed,

That lord whose hand must take my plight shall carry

Half my love with him, half my care and duty:

To love my father all.

It doesn’t seem to occur to her that her capacity to love can expand to include a husband without impacting her father.  Cordelia believes she is acting and speaking from principle, and she despises her sisters for their easy flexibility.  She is prepared to give away a third of her father’s land for the right to stand by her principles, and I have to admit to a sneaking admiration for her determined self martyrdom.  What she hasn’t bargained for is that Lear withdraws his love as well as his land, something she would not willingly have lost.

Actually thinking about it, King Lear is full of the negative impact of compromise and negotiation, as Lear divides and apportions love and land in unequal and unfair portions, only to have his two elder daughters negotiate away all his power and friends between them.

So what if Cordelia is wrong?  What if compromise is giving the other person something they want very much, that costs you nothing to let them have – after all, her father just wants her to say publicly that she loves him just as much as he loves her, and she does love him that much, but she just can’t bring herself to fawn in public.

And what if compromise means the other person want something you don’t want or need for yourself?

The concept of meeting in the middle seems to be part of the problem (although not in King Lear- never was there less middle ground in evidence!)  so why can’t compromise be about swapping ends of the seesaw of wants, so that balance is maintained and no one loses? 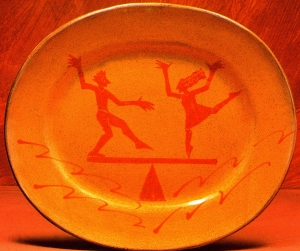 swapping ends of the seesaw of wants, so that balance is maintained and no one loses... image copyright Prue Cooper

So if the idea of compromise sends you leaping for your body armour and a banner saying NEVER!!! in dripping red paint, maybe its time to think beyond what you would never compromise on, and think: what negotiation is allowable?

If it is easy and no effort, is compromise acceptable?  Or does it somehow not count as a real compromise unless it hurts a bit?

What would it be like if compromise was easy, satisfying, rewarding, pleasurable…

If the banner and the armour weren’t needed, what could they be replaced with???

This site uses Akismet to reduce spam. Learn how your comment data is processed.